As many of you dear readers know we lost our beloved Gilda to old age on April 19. She was an amazing Belgian Shepard whom we rescued done 14 years ago who lived until almost her 17th birthday. When she passed I knew that another dog would come into our lives at some point. Most likely a dog that needed help just as she had.

Last Monday May 24 a video popped into my YouTube feed from the San Diego Humane Society. I clicked play and then made a comment that he was a handsome boy.

The very next day on Tuesday I was scheduled to meet with my friend and SDHS philanthropy representative Carol to make a donation in the honor of Gilda. It was a beautiful day and we sat out on the patio to catch up since Covid had kept me away from an in person meeting for more than a year. I even got to meet the SDHS President, Gary Weitzman’s, new Shepard pup as we got caught up on all the changes around the shelter as well as the new programs that are in the works.

After we met, Carol took me on a tour of the medical facilities and then at my request, the adoption floor. I wasn’t looking for Stubbs but recognized him immediately from his You Tube video when we walked past his kennel. He seemed sweet but was way larger than I have ever even desired a dog for my home, much larger than Gilda ever was and she was large for me. We kept on moving and I saw many more dogs. There was a chihuahua that caught my eye but nothing clicked that bell saying this is the one. We said goodbye and I went home.

However Stubbs and the Chihuahua both stayed on my mind. So on Wednesday I e-mailed Carol and she put me in touch with an adoption counselor. I set up an appointment to come in and meet the two pups Thursday morning.

The chihuahua was definitely sweet and much more my cup of tea, but Stubbs needed help. Turns out he had been found abandoned and tied up to a coffee shop railing in the La Jolla area of San Diego on April 25. Severely malnourished and underweight he had mange, mites, pyoderma, ear infections, severe skin infections, diarrhea and had very little fur left anywhere on his body. He was a dog that should weight 80-85 lbs who weighed in at 54lbs upon admission. By the time I met him and in these photos he has gained 10 lbs and you can still see every bone in his body. 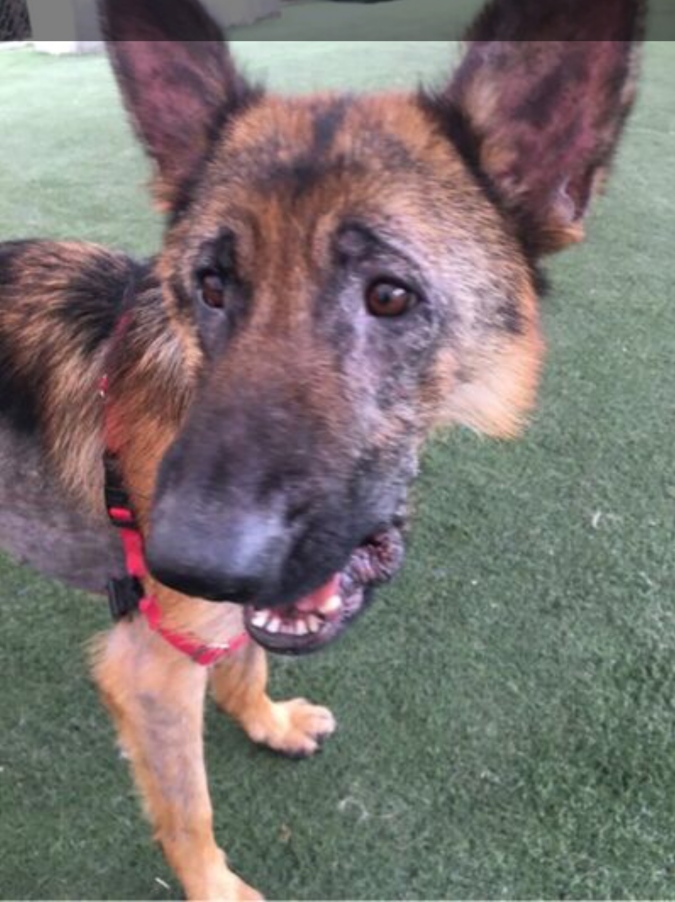 Oliver, AKA Stubbs, at the San Diego Humane Society. 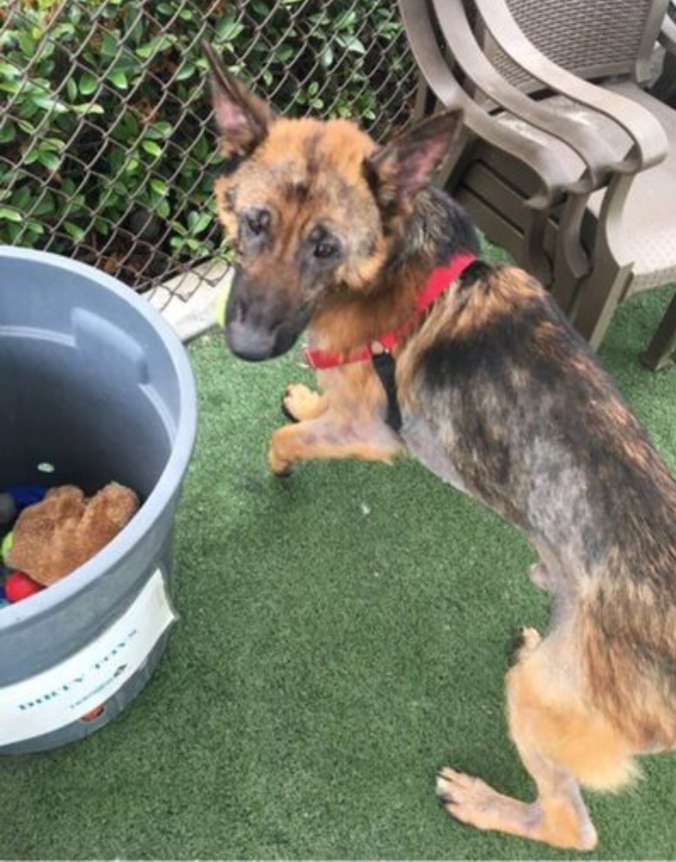 I didn’t adopt Stubbs at that moment but I made an appointment to come back Friday afternoon at 3:30 so The Better Half could meet both. As many of you know, Friday morning I received the news our beloved Anne Marie had passed away. I was devastated. At least I had something to look forward to in the afternoon.

The Better Half came home from work and off to SDHS we went. The adoption counselor greeted us and asked which one we wanted to meet with first. I said Stubbs. We were escorted into the agility yard and Stubbs was brought in. He was just a wonderful gentle soul who exudes love and joy even though he’s in such poor condition and obvious discomfort. It was a match. Ken looked at me and said “this is what we do, we rescue those who need us the most”.

After some paperwork, he was in the car and off to Petsmart for supplies we were going to need then home to meet the pack.

Strange people in a strange car, but he warmed up quickly and by the time we got home he was realizing he was safe and he was loved. 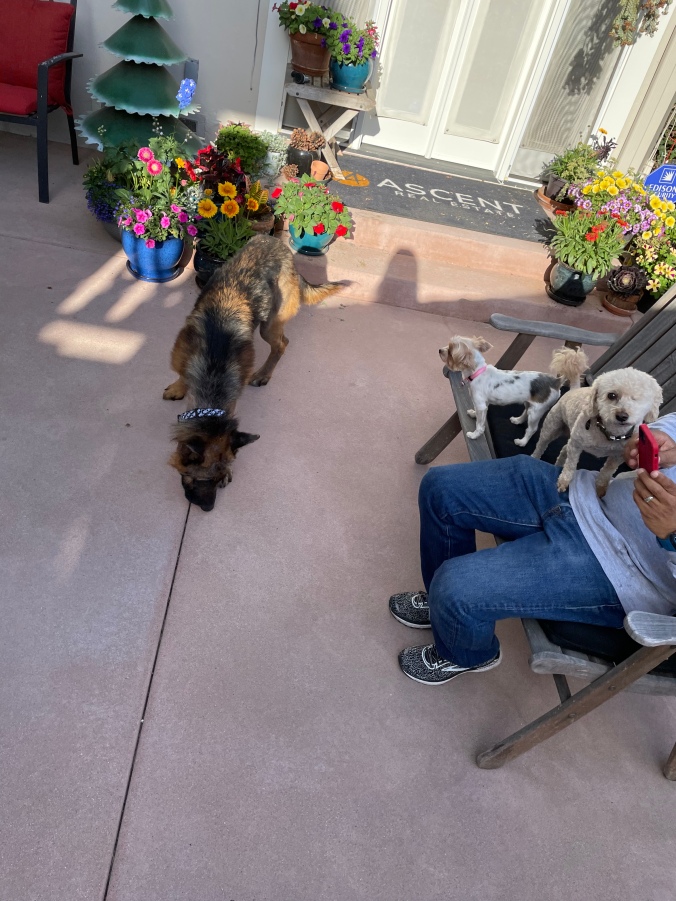 Meet the pack he did and he did very well, although Patsy still isn’t very joyful about it but she will warm up.

Oliver became his name in that short trip home as Oliver means “of the olive tree” and the olive tree means “Friendship”, he couldn’t be a friendlier guy. It just fit. He is adjusting well, knows how to sit and stay, is verbally expressive like a husky when interacting and he has not yet barked. He’s been to his new vet and has a dermatologist consult next week. He walks well on his leash, has had two baths and just a few days later he seems more comfortable in his skin. 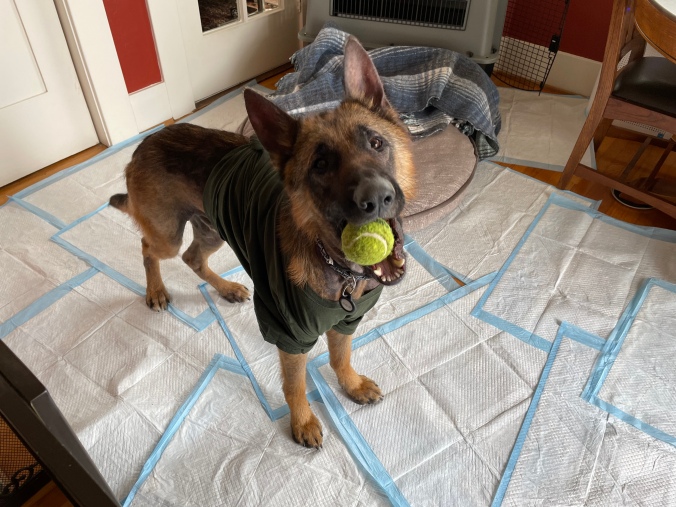 Oliver at home, even though there are Pads on the floor of his temporary room and so far he’s seems to be housebroken.

Oliver is just a big goofy gentle soul who has a forever home with two men and 5 little dogs who love him.
He’s even a gentleman when riding to the vet!

My heart is filled with joy. Oliver is a gift of love and joy!