Just released is a newly updated digital mix of the Beatles classic Here Comes The Sun.

Just in case any reader here today wishes to contact their own US House Representative to offer support, an opinion, encouragement or suggestions about the current issues facing our country and government here in the USA, we here at Fearsome Beard are going to help.

We wish to help by posting the link where you can put in your zip code and be connected to your personal US House Representative’s e mail immediately. Help those in need. For some reason this tune just seems appropriate at this moment in time.

🎼 Get ready for the judgement day!🎶🎵 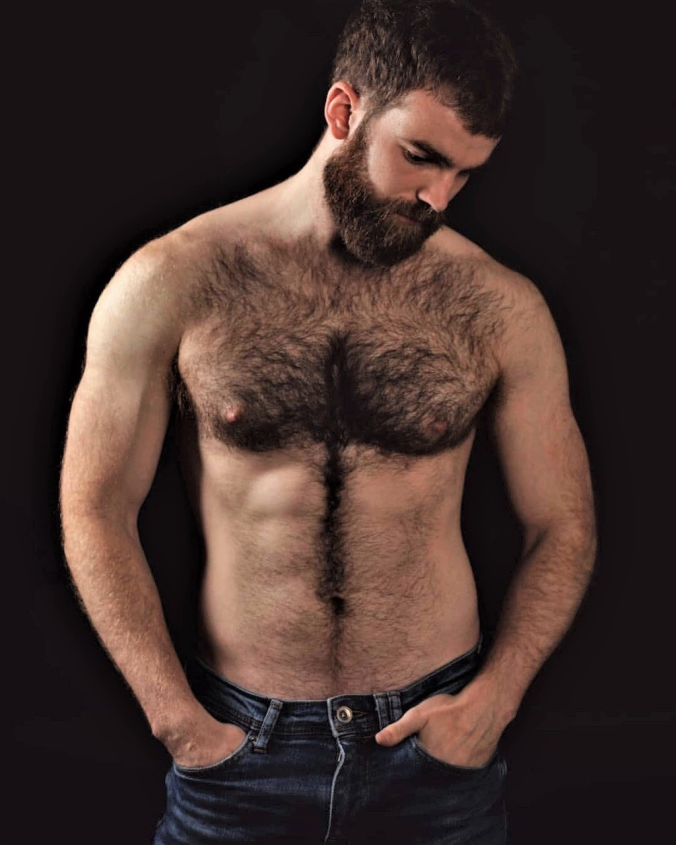 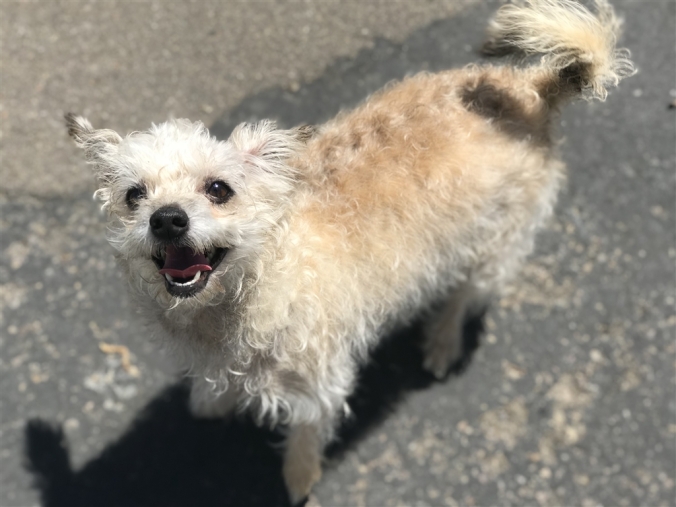 Hazel has been adjusting quite well. She had her first veterinary visit today and has a clean bill of health. She is a happy girl! 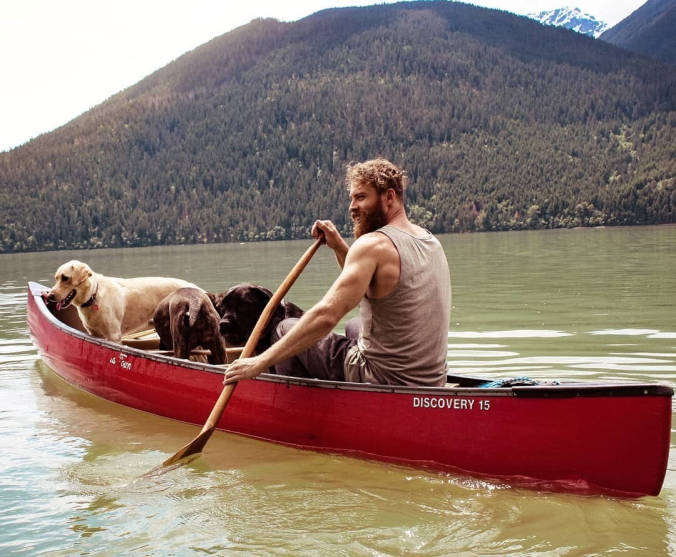 What would you name this adorable girl? 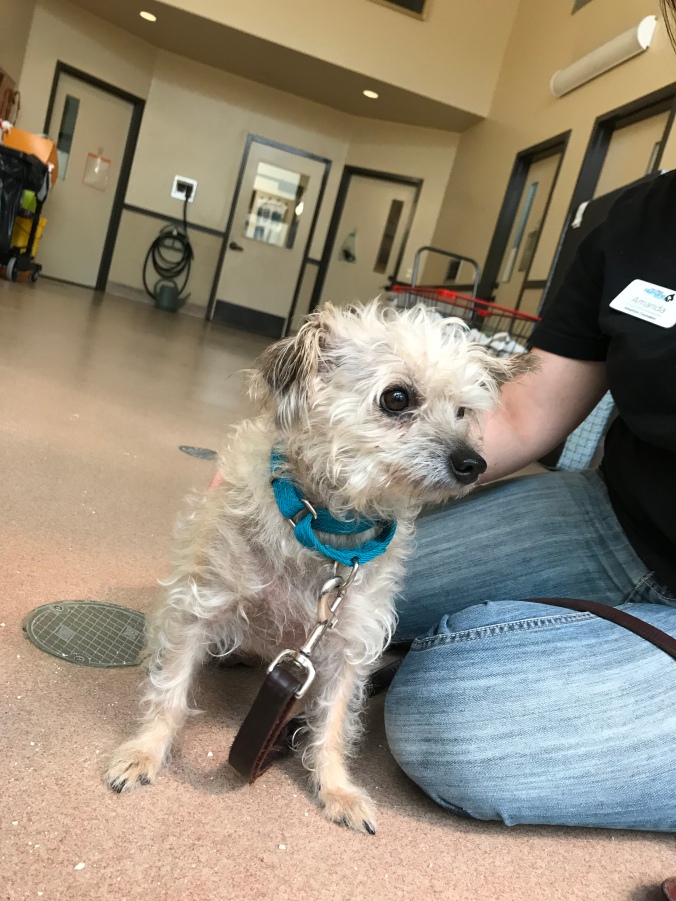 What name comes to your mind?

The first three photographs were from the San Diego Humane Society website. The fourth photo is from my iPhone when I met her in person this morning. The name given her upon her transfer into SDHS August 13 up until her adoption this afternoon at 5 pm was Riley. She doesn’t respond to Riley and we don’t think it fits her.

Oh, did I forget to mention that we adopted a dog today?

This summer has been one of loss for us after first losing Mitzi back in June and then losing her brother Virgil unexpectedly last week. The better half wasn’t so sure me going from shelter to shelter was the best way to deal with my grief. I mean after all we still had 5 dogs. However I saw our girl to soon be named on the SDHS website when grieving the day after Virgil passed and was immediately taken with her.

I went to SDHS to take a look at her that same day last week and she was asleep when I found her so I went out to talk to the receptionist and find out more. Her story goes like this:

She apparently was at a shelter out on El Centro CA (about a 2-3 hour drive east of San Diego out in the desert) where they have way more dogs than adopters. SDHS contracts to take 30-40 of this shelter’s dogs headed for euthanasia monthly in order to lessen the number of dogs needlessly killed in that community. She was a lucky one on August 13. She arrived here, was spayed and then went up for adoption.

She was adopted fairly soon thereafter, but was returned back to SDHS as she reportedly did not get along with the man of the household. She was shortly thereafter adopted again and then returned after she snapped at one of the children who had swatted her with a flip flop for peeing in the house. It was after that return I found her last week.

After hearing her story I had to think about it as dogs that have bounced in and out can develop behavior issues, or ones they have can be reinforced or exacerbated. Plus was it healthy for me to bring a dog home the day after Virgil had died in my arms? The next day I was extremely busy with work. The day after when I went to look for her and she had been adopted. I was glad to hear the news.

Last evening she popped up on the SDHS website as having been relinquished by her owner. This morning I couldn’t stay away, I had to know what had happened. Apparently the third adopter had her for five days and discovered she was allergic to our girl who has yet to be named and returned her yet again.

Saved from euthanasia only to become a boomerang.

This morning I met the most sweet little girl in person. She’s about 3 years old, is overweight at 14 lbs (at her size she should weight 9-10lbs), gentle, trusting, loving and very easy going. I left to think some more and get some work done. I went back before my personal training appointment and put a hold on her until I could return. I returned and had another one on one meeting with her and the bond was made. I cried tears of joy as I signed the paperwork and then sobbed tears of joy when the adoption counselor placed my newly purchased pink collar and leash on her for me to walk her out.

She strutted proudly out of SDHS, hopped right into my car and clung tightly to me all the way home.

She may have struck out three times after her life was spared, but on her way back to the dugout she somehow managed to cross home plate. She who has yet to be named has a new forever home. A new forever home with five other dogs that accepted her right into the pack. 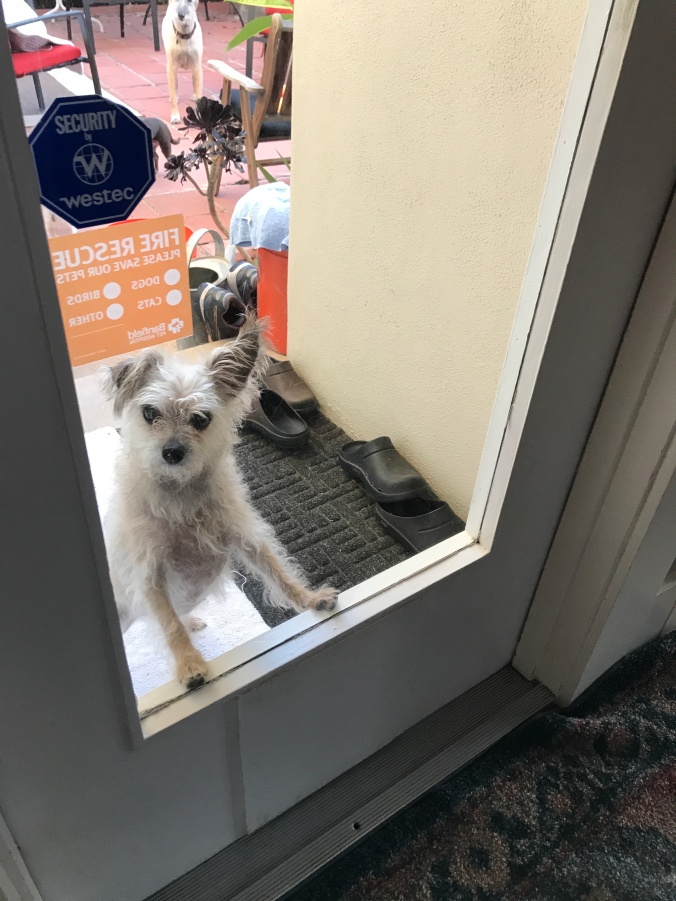 Standing at the back Door of her new home.

San Diego Humane Society or SDHS has not euthanized an adoptable animal since the summer of 2014. They have committed to taking in all animals from other organizations in San Diego County to prevent the euthanasia of any adoptable animal in our county. This mission makes San Diego County one of only very few counties nationwide, or localities worldwide, with zero euthanasia. SDHS also takes in animals from our neighboring counties, thus saving the lives of pets beyond our county’s borders. Without SDHS expanding their mission, our new little girl would otherwise have met an early and unnecessary death.

If you would like to support such an organization as SDHS in their no kill mission, please click HERE.