It’s my nephew’s 29th birthday. He lives here in sunny San Diego California near his uncle. The rest of our family lives back east spread here and there along the coastal states but mostly right in the center of it all. A place I call Virginia.

Needless to say his mother is back there so the maternal side of Fearsome popped out when I asked him yesterday which of his mother’s home made cakes he would like us to bake for him to celebrate. Her Coca Cola cake was his answer.

So today I set aside a few hours of kitchen time. Quality time with the dogs, fresh pressed coffee, a Rich Roll pod cast and my circa 1946 Gaffers & Sattler range.

I set out to make two cakes, one for Josh and one for my Sunday morning meeting. Josh gets the first one as I didn’t quite get the icing as good on that one. The meeting gets the other because they think I’m a pro. The both will taste the same but the second one is prettier.

I’m so vain. I bet I think this post is about me.

Combine cake mix, pudding mix, eggs & melted butter in large mixing bowl and beat on low speed just until blended then set aside. In medium sauce pan bring the 1 & 1/4 cups of Coca Cola to a boil. With mixer on medium speed slowly pour hot Coca Cola into cake batter (careful as it will splash) and mix for 2-3 minutes. Pour batter into greased and floured (Baker’s Joy spray is much easier) 13×9 inch pan. Bake at 350 degrees F for 25 minutes or until inserted toothpick just comes out clean (usually right after sides of cake have pulled away from sides of pan). Cool in pan for 10 minutes then flip onto cookie or serving sheet. Note you pour icing over warm cake.

Combine the butter, Coca Cola & Cocoa in a large saucepan cooking over medium heat just until butter is completely melted, do not boil. Remove from heat and add powdered sugar and vanilla and beat until smooth then pour over warm cake starting from center so it spreads itself evenly and outwardly to fall over edges of cake. Then sprinkle with chopped pecans. 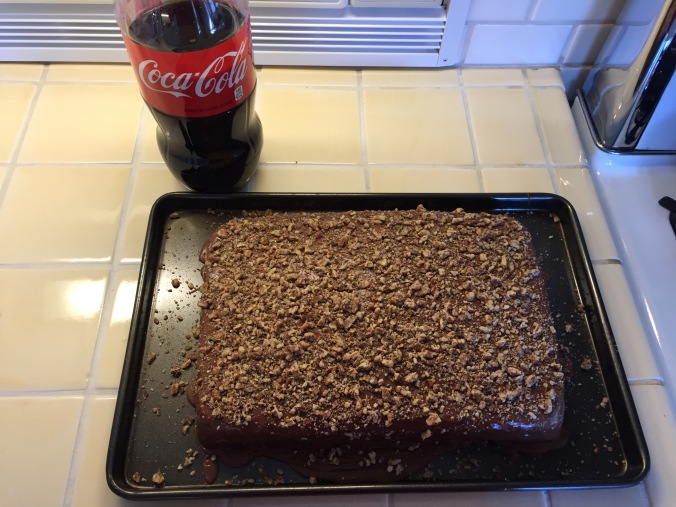