It takes a lot to run a country. A lot.

Washington DC is an amazing place. Fifty states, numerous territories, 300 plus million people all rely on a cohesive central government that then has to maintain some sort of relation with all the other countries and people who inhabit this planet. It’s a government that is in constant transition and evolution. House representatives can change every two years, the Senate every six, justices until they retire and presidents every four. Each member has numerous staff and each administration thousands. All of these people working for those elected are only here for the terms of their official. They don’t get hired out of college to stay until retirement. Think about that one. Change, it’s how our founding fathers designed it.

Yesterday I saw this quote in the Jefferson memorial, inspirational it is: 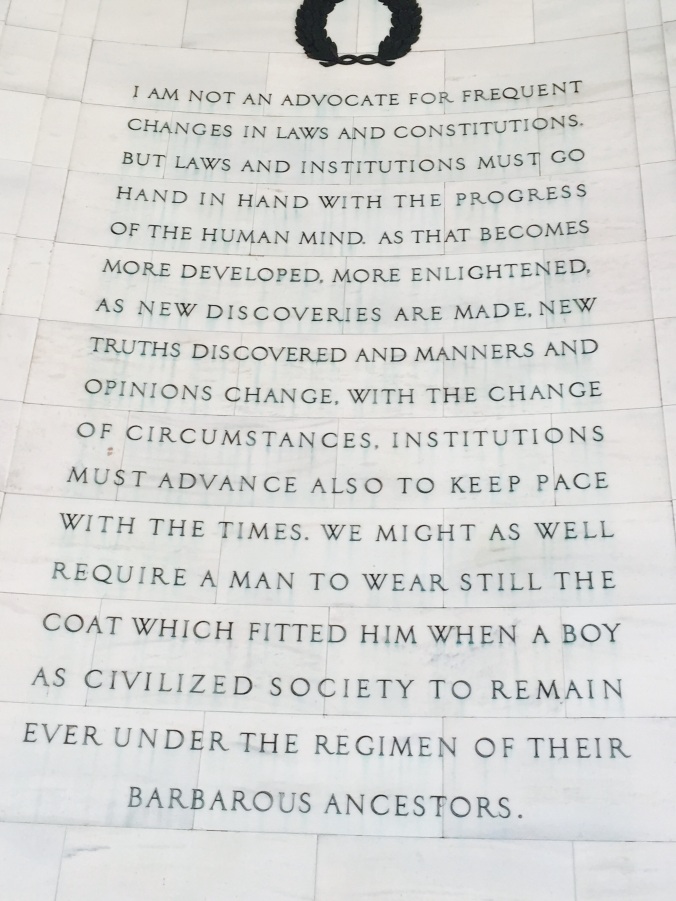 Jefferson’s wisdom, may it stay with us far into our future.

Checks and balances can be frustrating and slow yet they help us evolve. Progress is not always a straight line to the best result but with debate and work we can get there. A couple of days ago I was reading about an election in a city near my own where a winner was finally declared. The winner won by two votes. Two. Every one of us has a vote, everyone of our votes counts.

The people of this city live with change, are taxed without representation, work hard long hours and serve a nation and a planet. I am thankful for the people of this city. I am thankful to those who transition through to make our government work as well as thankful to those who make this city their permanent home to support our ever evolving heart. The heart, the soul of our progressing, not perfect but progressing, civilization.

One thought on “Inside the beltway”